NCDs mainly refer to four groups of diseases that are not infectious or communicable.

. **Note: other conditions such as dental caries, mental health, suicide and teenage pregnancy are also classified as Non-communicable diseases.

NCDs are often described as preventable diseases with risk factors such as a person's social, cultural, lifestyle and environmental backgrounds increasing the likelihood of disease onset.

Unlike communicable diseases, there is no clearly identified disease-causing agent like bacteria or virus we can fight. NCDs are not caused by germs, but rather by socio-economic, cultural and environmental-driven lifestyle behaviours. 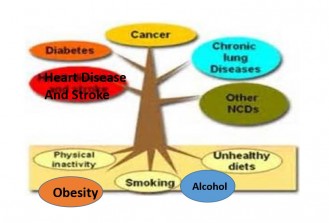 A number of common modifiable risk factors identified include:

The World Health Organisation (WHO) estimates indicate that NCDs kill more than 36 million people each year and approximately one quarter of these deaths are premature, occurring in people before the age of 70 years.

(CDs were once considered to be diseases of the rich and old people. Today, NCDs disproportionately affect the poor and younger age groups causing 85% of premature deaths in low and middle-income countries including the Pacific Island nations.

WHO DATA PORTAL ON NCDs

Ten of the countries with the highest rates of obesity worldwide are small island states. The highest prevalence of diabetes among adults in the world is also projected to be in SIDS. Rates of mental health conditions reach as high as 15% in the Pacific and the Caribbean.

The portal allows users to explore the burden of NCDs in the 40 WHO Member States classified as SIDS, providing detail on the morbidity and mortality of the main NCDs as well as the prevalence of their key underlying risk factors and information on the actions these countries have or have not taken to address NCDs.

Pacific Island countries you can look up data for include Tonga, Cook Islands, Fiji, Samoa, and Niue.